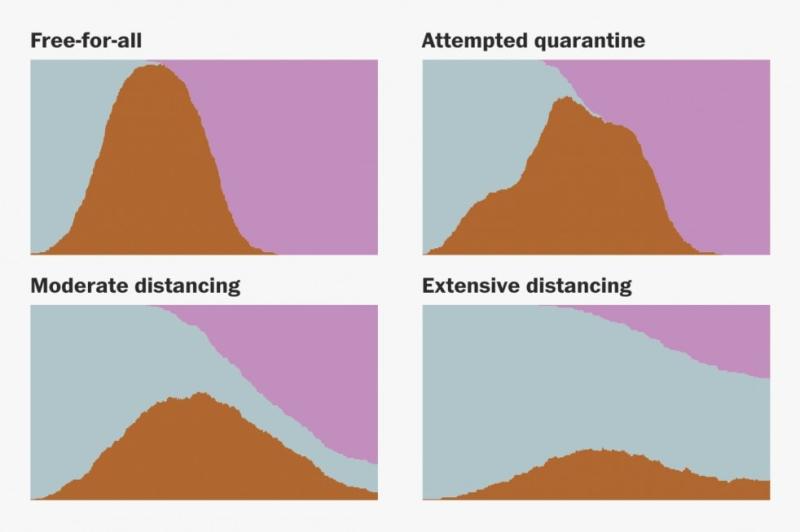 After the first case of covid-19, the disease caused by the new strain of coronavirus, was announced in the United States, reports of further infections trickled in slowly. Two months later, that trickle has turned into a steady current.

This so-called exponential curve has experts worried. If the number of cases were to continue to double every three days, there would be about a hundred million cases in the United States by May.

That is math, not prophecy. The spread can be slowed, public health professionals say, if people practice “social distancing” by avoiding public spaces and generally limiting their movement.

Still, without any measures to slow it down, covid-19 will continue to spread exponentially for months. To understand why, it is instructive to simulate the spread of a fake disease through a population.

We will call our fake disease simulitis. It spreads even more easily than covid-19: whenever a healthy person comes into contact with a sick person, the healthy person becomes sick, too.

In a population of just five people, it did not take long for everyone to catch simulitis.

In real life, of course, people eventually recover. A recovered person can neither transmit simulitis to a healthy person nor become sick again after coming in contact with a sick person.

Let’s see what happens when simulitis spreads in a town of 200 people. We will start everyone in town at a random position, moving at a random angle, and we will make one person sick.

Notice how the slope of the red curve, which represents the number of sick people, rises rapidly as the disease spreads and then tapers off as people recover.

Our simulation town is small — about the size of Whittier, Alaska — so simulitis was able to spread quickly across the entire population. In a country like the United States, with its 330 million people, the curve could steepen for a long time before it started to slow.

[Mapping the spread of the coronavirus in the U.S. and worldwide]

When it comes to the real covid-19, we would prefer to slow the spread of the virus before it infects a large portion of the U.S. population. To slow simulitis, let’s try to create a forced quarantine, such as the one the Chinese government imposed on Hubei province, covid-19’s ground zero.

Continue this story at:

Looking for funding?
Submit your pitch!